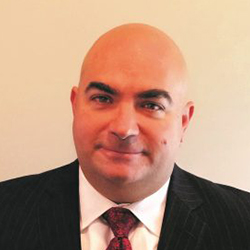 Tony is a 1990 graduate of the University of Richmond.

He began his career at Prudential (now Everest) Reinsurance.  He later created successful start-up Marine and Aviation treaty underwriting operations at AXA Re US and ACE Tempest Re US.  Tony joined Swiss Re in 2004 and he is currently Head of Marine Reinsurance for the Americas and Head of Aviation Reinsurance for the US, as part of Swiss Re’s Global Special Lines Division.

In addition to his role at Swiss Re, Tony serves on the Board of Directors, and as Vice Chairman, of the American Institute of Marine Underwriters.  He is a former Chairman of the Executive Board of the Water Quality Insurance Syndicate.

He is a frequent speaker on marine insurance and reinsurance topics and has been interviewed and featured in many industry publications.