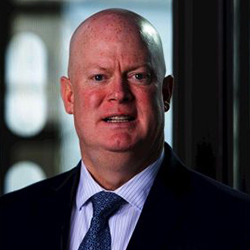 Sean Dalton is the Head of Marine Underwriting, NA for Munich Re America and is based in New York. He leads the reinsurance team responsible for Marine in the US and Canada.
Sean serves the Marine industry through participation on various committees. He is the former Chairman of the Cargo Committee for International Union of Marine Insurers (IUMI) and also is a member of the IUMI Policy Forum. Sean also serves on the Board of Directors for American Institute of Marine Underwriters (AIMU), and is a member of the National Cargo Bureau (NCB) serving on a number of their committees. He is also a member of the American Bureau of Shipping (ABS).
Sean is a graduate of the United States Merchant Marine Academy at Kings Point. He earned his Master’s degree from State University of New York Maritime College and served as a Lieutenant for the United States Navy Reserve from 1988 – 1999. Sean holds the professional designations of Chartered Property Casualty Underwriter (CPCU) and Associate in Marine Insurance Management (AMIM). He received the Distinguished Service Award from the American Institute of Marine Underwriters and the Harold Jackson Scholarship in Marine Insurance from the College of Insurance (SJU) and the American Institute of Marine Underwriters.