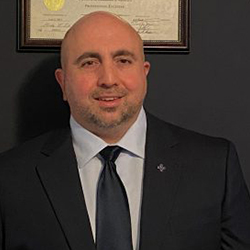 Mr. Michael Venturella is a Professional Engineer in naval architecture and marine engineering with over 20 years of experience. His broad expertise and knowledge of the marine industry includes operation of deep draft commercial and military vessels, forensic marine investigation, marine survey, commercial shipbuilding and repair, salvage engineering, machinery, vital system automation, hull structural failures, and stability.
Prior to joining Envista, Venturella had a decorated U.S. Coast Guard career from which he retired as a Commander. During his time in the U.S. Coast Guard, he served as an engineer on Coast Guard cutters, senior naval architect and salvage engineer, highest ranked active Coast Guard marine surveyor, lead auditor of maritime company management systems, and a leading forensic investigator for the most high profile marine investigations led by the Coast Guard. Venturella is a graduate of both the U.S. Coast Guard Academy and Virginia Polytechnic Institute and State University. He has been published numerous times and is an established global leader in the marine industry he has spent his entire career serving. Michael oversees the Marine Group practice globally for Envista, and is based out of Washington, DC.