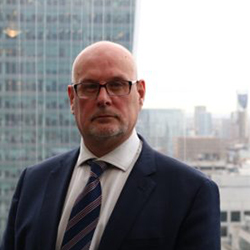 Mr. Hancock leads AIG’s International General Insurance operations, which include gross premiums of approximately $18 billion of commercial and personal insurance businesses in Asia Pacific, Japan, United Kingdom, Europe, Middle East and Africa and Latin America and Caribbean.  In this role, he is responsible for the operation and long-term strategy to deliver profitable growth and enhanced service to clients and distribution partners across AIG’s extensive international footprint.

Mr. Hancock has more than 30 years of insurance industry and international operating experience.  He joined AIG in June 2020 from Lloyd’s, where he was Performance Management Director with responsibility for overseeing performance and risk management globally across the Lloyd’s market. He also served as a member of the Lloyd’s Franchise Board.

Prior to Lloyd’s, Mr. Hancock enjoyed a career of more than 25 years at RSA Insurance Group, including as Managing Director of UK Commercial, which encompassed RSA’s European Specialty businesses, and Global Broker Relationship Director. Previously, he served as RSA’s Chief Executive Officer, Asia and Middle East, and held chief underwriter and risk roles in a variety of developed and emerging markets.