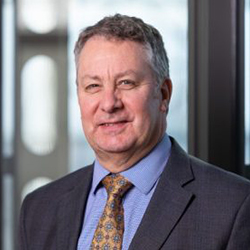 John joined AIMU on October 1, 2013 and was named President of AIMU on January 1, 2014.  AIMU, founded in 1898, is a not-for-profit trade association representing and promoting the U.S. ocean marine insurance industry. John has over 35 years’ experience in the ocean marine insurance and reinsurance business, having previously spent 8 years at Guy Carpenter & Co. as Senior Vice President of the Marine & Energy Specialty practice and 21 years at The Hartford, where he was Senior Vice President responsible for world-wide Marine Treaty Reinsurance at Hartford Re Company. He started his career as a Marine Trainee at The Hartford in Boston after graduating cum laude from Bowdoin College with a B.A. in Economics and Government.

John is an active member of several marine industry organizations including the American Bureau of Shipping, National Cargo Bureau, Maritime Law Association of the United States, the Association of Average Adjusters of the U.S. and Canada, Connecticut Maritime Association, and the Marine Society of the City of New York. John is very involved with the International Union of Marine Insurance (IUMI) as chair of the Education Forum and secretary of the Loss Prevention Committee, and busy planning for the 2022 IUMI Conference to be held in Chicago next September.